Behind the Scenes: Tabor Gets Ready for Thoroughly Modern Millie 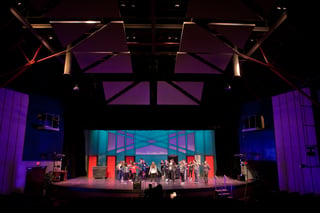 Everyone knows that Tabor’s winter musical is one of the largest drama productions of the year. But what goes into making such a large-scale production work by the time the first note is sung on opening night? Having gotten the chance to experience first hand what goes into the making of the musical let me tell you there’s a lot more than meets the eye.Sure the cast is essentially the face of the production, but what about the people behind the scenes? The ones who really bring the musical to life are the tech and costuming crews. Costuming transforms the students you see walking around campus into their characters on stage. Thoroughly Modern Millie is set during 1922 so Lulu leggings and Patagonias are a bit ahead of the time even for an era that was known for more risqué fashion statements. 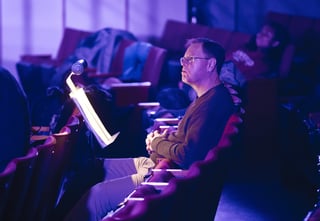 The costuming crew spends their afternoons hunting down costume pieces for each cast member, taking our measurements down and ensuring that each piece is suited for each individual and the specific role they are playing. While the costuming crew is busy bringing each character to life the tech crew is working hard to bring the musical out of the auditorium at Tabor and into places like Hotel Priscilla, Speakeasies in New York, and Trevor Graydon's business office.

The students on the tech crew work with lighting the stage, furnishing the backdrop and other large-scale props in the woodshop, and ensuring that the show has the right scenery to make it run smoothly. The tech and costuming crews provide the production with the foundation that make the show function. 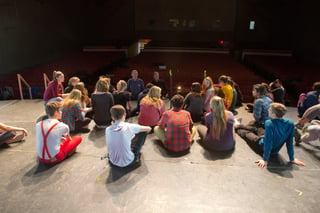 So what’s actually happening on stage while the other crews are busy creating the magic behind the musical? If anyone says you don’t do anything during musical, they obviously haven’t done it themselves. On the first day of choreography the entire cast was up on stage stretching. When we stood up I assumed we would get right into learning the steps until suddenly the dance captains called out that we were doing jumping jacks to warm up.

Alright, I told myself, I ran cross country. I can handle a couple jumping jacks. Little did I know we were about to do over two hundred of them all at once. By the end of practice I was sweating from attempting to do runs, leaps, and high kicks, all while singing out lines to the song which is nearly impossible to do when you’re out of breath. The hardest part behind all of it is making people believe it’s easy. Despite feeling like you just ran a marathon you strike a pose and smile at the end of it anyway.

On top of the highly demanding dance routines we spend hours learning the songs. My singing has never really extended much farther than the shower so when faced with the task of having to harmonize I failed quickly. I either sang the completely wrong pitch or I sang some other sections'. And if you complain after seeing the musical once that all the songs are stuck in your head, just imagine what it’s like having to sing them since December.

What I’ve seen from doing the musical this winter is that there is a lot more work put in to ensure there’s a show on opening night than can be seen from the audience, and that the people with talent are both on and off the stage.