The Appalachian Trail is a nearly 2,200-mile footpath that roughly follows the ridgeline of the Appalachian Mountains, beginning on Mt. Katahdin in central Maine, and ending on Springer Mountain in northern Georgia. This past summer and fall, my friend Lulu Russell ’17 and I hiked from one end of it to the other. 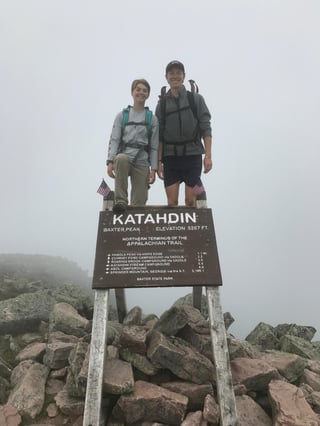 It all started our first year at Tabor, following a presentation on studying abroad in Tabor Foundations (now called the LEAPS Seminar). Filled with ideas for grand adventures, Lulu and I discovered our shared goal of thru-hiking the Appalachian Trail. We decided then to do it together, and the plan stuck with us all through high school, until we finally set out at the beginning of July.

Due to the timing of seasons, we hiked the Trail from north to south. This is unusual, as the vast majority of thru-hikers start in Georgia and end in Maine. In the end, we were very glad that we chose this direction, as the trail was not flooded with hikers, making it easier to find shelter space, as well as to get privacy when needed. Additionally, we encountered north-bounders immediately after starting, and were able to glean important advice from them that made our hike more enjoyable.

Hiking the Appalachian Trail is a great way to see nature. Along our hike, we passed across spectacular alpine ridges and through lush river valleys. I saw three black bears (Lulu saw four), a handful of lumbering porcupines, and countless graceful deer. While the animals and vistas we encountered were breathtaking, the greatest part of hiking the Trail was the people we met. Between Maine and Georgia, Lulu and I met a former New York investment banker, a Naval Intelligence Officer turned massage therapist, and a twentysomething from Norway, among many others. While there were countless people who we only saw once, Lulu and I had a core group of friends, or Trail Family, by the end of our hike consisting of five other people. This group of friends helped to make our hike exponentially more exciting, and our hike would not have been the same without them. We all are still in touch, and are planning more hikes in the future.

Life on the trail is vastly different from living at home or at Tabor, and the first few weeks of our hike felt strange and unnatural. Countless aspects of our way of life changed: The only thing we did all day was walk; we went to bed and woke up with the sun; our biggest concerns were where we were going to sleep that night and if it was going to rain; and we started going by different names. On the Appalachian Trail, as with other long-distance hiking trails, it is customary for hikers to take on trail names. These monikers often are bestowed by fellow hikers and stem from a funny story or trait of the individual. My trail name was “Granola,” due to my affinity for the snack, and because I found free granola in a handful of shelters and was given more from passing hikers. Lulu’s trail name was “Small Steps.” Going into the hike, she was recovering from leg surgery and was not fully healed - the biggest piece of advice Lulu’s doctor gave to her for the hike was to take “small steps,” and that seemed like an obvious choice. “Small Steps” was later shortened to “Smalls,” because it was easier to say.

Despite all these changes, Lulu and I eventually became accustomed to trail life. Things that were once unnatural to us, like filtering all of our water, became normal. In fact, we became so used to life in the woods that living at home felt foreign to us on our return.

While there were certain things about hiking that were always uncomfortable to us, like using our headlamps to hike at night, or setting up our tents in the rain, there is not a thing we would change about our experience. The direction we chose gave us the perfect balance of nature and human interaction, and the friends we made on trail are some of the best we have. We experienced only a few days of all-day rain, and conditions were exceptionally cold or hot even less. The only snow we experienced was an inch or less.

When it was all over, Lulu and I hiked 2,190.3 miles from July 7, 2017 to December 5, 2017 – a total of 152 days. At the beginning, we usually walked between 10 and 13 miles per day, compared to 18 to 22 miles per day at the end of the trail. When combined with nine rest days without any hiking, our average daily mileage was just under 14.5 miles per day. This trek was a fantastic way to end our high school career, and we are both proud to have conquered the challenge. Now, on to the next!