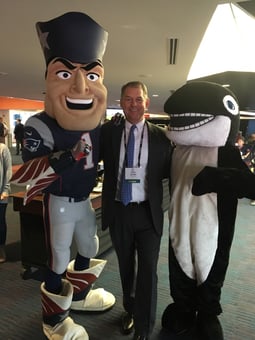 There is a clarity of expectation that the Patriots have – love them or hate them it is inarguable. Their aspirational vision – to be champions, not every so often, every year. Their mission – to put players and coaches in the best position to do their jobs fully and confidently. Their long range plan – to build a culture of confidence in one another, that is focused on doing what’s best for the team and on making – time and again – the best next play, which is always the most important play. It’s clear and portable – everyone knows this around here and everyone can explain it. I love it.

And I love that we’re here tonight in this place imbued, saturated with winning ways and winning accomplishments, as we continue to build together a future Tabor that is known for its winning ways, its accomplishments, its clarity of culture, its ambitious course through the world.

Championships at school are, of course, measured differently and much more personally. The stretch of a young person’s experience towards transformational growth, and towards the adult they will one day be is more personal by far, and more precious than super bowl trophies. How best can we help them to compete in the world they will play a part in? How best to make them ready – exceptionally ready – to be the adaptable leaders we want them to be, the citizen-scholars the world needs them to be? How best to make them resilient enough and tenacious enough and adaptable enough to make that proverbial next play. How best, how best, how best? That’s the question asked often in and around Gillette Stadium I know, and it is the central question we’re asking all the time at Tabor today. Why the Patriots could just as easily have their alumni event in Marion, and be inspired by our singularity of purpose!!

Ours is a school reaching beyond what we thought might have been possible. We’re stretching towards the stars, though not grasping them, and more often than ever we’re caressing excellence. We’ll never be there, we are engaged in a forever “not yet” journey. But we’re stretching, striving, competing, building and living winning ways and habits – for the students in our charge – and we are accomplishing! We all have our jobs – mine as the Head, for some of you as Board members, for many of you as parents, as students, as alums. Each of us has a job, as part of this enterprise we love and want to succeed, as part of a winning and ambitious culture we’re generating and growing and sustaining.

These days, I want to know who were competing against, and I certainly want to know if they’re doing things that could improve us, or we to improve them – that’s been the fun of the ISL. I’ll tell you, and I mean it though – lots of people are looking our way. Still truly, my focus is on us. It’s on us making the most of the opportunity we’ve been given to be part of this school’s history, and to leave it a better place than when we found it. What we are doing together is incredible. We’re only in some ways at the start, but what a start it’s been, and what seasons lay before us. Thanks so much for all you do and for coming out today for Tabor.

Click here to see more photos of the day!