Service In Thailand: Living with the Lahu Tribe

The second half of our student’s visit to Thailand was to visit the Lahu Tribe and help them with some homebuilding. Here are a few entries about the work they engaged in.

This morning we woke up in the hotel, which was a nice and much needed break in the middle of the trip to regroup and prepare for the hard work ahead. In the hotel, we learned about the Lahu Tribe — the tribe we will be staying with for the remainder of the trip — and their history. One cool thing we learned was that Jafa, one of the Kings, had 11 children and one of them was a manager our hotel!

After we left the hotel, we hopped into the back of trucks and headed towards PoiPumeun. Once we arrived, we met a man who grew and cultivated tea. In small groups, we picked tea leaves and collected them into woven baskets. The view from the tea fields was breathtaking! It started to rain heavily while we picked the tea, but our mood did not sour. Instead, we started to sing to boost our mood. After we collected leaves, we dried them over a large bowl that would be later dried in the sun and ultimately become the dried tea leaves. Our guide brought us into his home and let us taste the tea. It was AMAZING! A few of us actually packaged up some of the tea to bring home, which will be fun to drink because we will remember the process making it so much more special.

After working the tea fields, we returned to camp to get our dorm and work assignments for the homebuilding project. I was put into the cement group which helped make the foundation of a house. We wheel-barrowed sand, rocks, and packaged cement to the site of the house. We also “fire-lined” buckets of cement which is always so fun. Even when it started to pour — which we learned happens throughout the day— my group and the workers huddled under a makeshift tarp and waited out the rain with smiles on our faces. Once the workday was over, we returned to camp for dinner. Dinner tonight was DELICIOUS! We at the best fried pumpkin I’ve ever had! For the rest of the night we will hang out and make memories that will make this trip one to remember!

This morning, instead of waking up to roosters, we woke up to the beautiful music of the Lahu Tribe. Breakfast was the typical rice and veggies which was met with some hesitation due to all the rice we have eaten in the last few days. But we ate it happily anyway.

After a nice buffer of free time spent talking and playing cards, we began construction. One group of about 15 people traveled to the top of the hill to continue making the mixture for bricks. Once the mixture was complete, we began filling the brick molds; by noon we had made over 100 bricks! Other groups split bamboo and used a hoe to level out the foundation for one of the two houses. Others had the difficult task of bending iron for the foundation.

At about noon we headed down the long and EXTREMELY slippery hill for lunch and a brief break. Lunch was rice with a Thai style chicken, which was met by great joy due to how tired we all were after working as “fire lines,” or human chains. These lines greatly reduce the number of times we had to walk up the hills, which was appreciated because of how slippery the hills were. These chains carried sand, rock, and water needed to make the cement that was used to set the iron rods for the foundation of the house. Although quite efficient, this was still tiring and left us covered in dirt and cement.

At around 4:00 PM we all decided to call it a day and went back to our rooms to clean up and relax before a delicious dinner of fried chicken thighs, rice, and veggies. The rest of the night was spent talking playing cards, and sitting by the fire, all while feeling rewarded for all the work we did today!

We have mostly gotten used to the routine at the Lahu village: breakfast at 8 after being awaken up by church music and their 6:00 AM bells.

Morning construction was the first thing on the agenda for the day. Many had “fire lined” wooden planks, while a few had gone to the second house we were working on to fill the foundation with dirt. By the end of the morning, many were physically and mentally exhausted by the work from the previous days. Lunch brightened up everyone’s mood, recharging from the exhaustion of the morning construction. After the fulfilling meal of chicken and rice, soup, a Thai fruit, many began playing cards. It is a sight that has become extremely common since our stay at this village. Through card games during every free block, we have gotten closer to each other, and the games have helped us to feel more comfortable here.

The afternoon construction felt tough, as we all began to lose focus and motivation. In my group, many of us had hoed dirt for two days. At one point, we began thinking extremely negatively and complaints filled the air. However, the woman in charge of the house had come to the site and told us that the house we were building was going to be a model for more village houses, as they were all being rebuilt. Immediately, our attitude changed, and we were reminded of the important work we were doing.

Dinner was a bit different from the other nights, as the people in the village had taught us how to cook with bamboo, a traditional method of cooking. Afterward we interacted with the people of the village, playing games and learning more about their traditions. Little children swarmed us and the smiles on their faces were so wide. Walking around, dancing around the fire as we held their hands, we realized that language is not always necessary to build a connection with people. The children sang a song for us, and we ended up singing the Tabor alma mater. Leaving and saying goodbye to them was difficult, although we had only met them an hour prior. The Lahu village people were so warm and welcoming!

As I sit here writing in my journal, people are chatting around the table, singing along to Yoyo's guitar. I can't help but feel sad leaving this village, for we made countless memories here. There may have been hardships, but at the end of the day, we talked to one another with smiles on our faces, making the most of this incredible journey.

It's the last day of our service trip and everyone is excited to take proper showers! We are sad at the same time — we had made so many good friends who left us with great memories. We will always cherish this time spent building walls out of red mud, working hard each day, but sometimes stopping to have "friendly" mud fights! Most importantly, we are filled with joy and pride after transforming a couple of concrete pillars into a stable house for a village family.

After working in the morning, our tour guide decided to reward us by taking the group to a beautiful natural waterfall. Diving into the water with our Thai friends was as exciting as scooping the water and pouring it over our heads.

In the hotel, as I was showering, I could not stop thinking about that basic bathroom in the village with water so cold it takes your breath away. I realized how lucky we are to have access to electricity and clean water so easily. But with this access comes greed. I feel the people in the mountain are truly happy because they know how to achieve maximum happiness with very limited resources.

I am very fortunate to be on this trip because it has changed the way I value things around me.

Tabor's service trip to Thailand ended Tuesday, June 20, with the students are heading home to the U.S. via Shanghai. No doubt they have learned about a new culture and life in another part of the world, as well as gained a broader understanding of the meaning of team work and hard work! Well done, Seawolves! 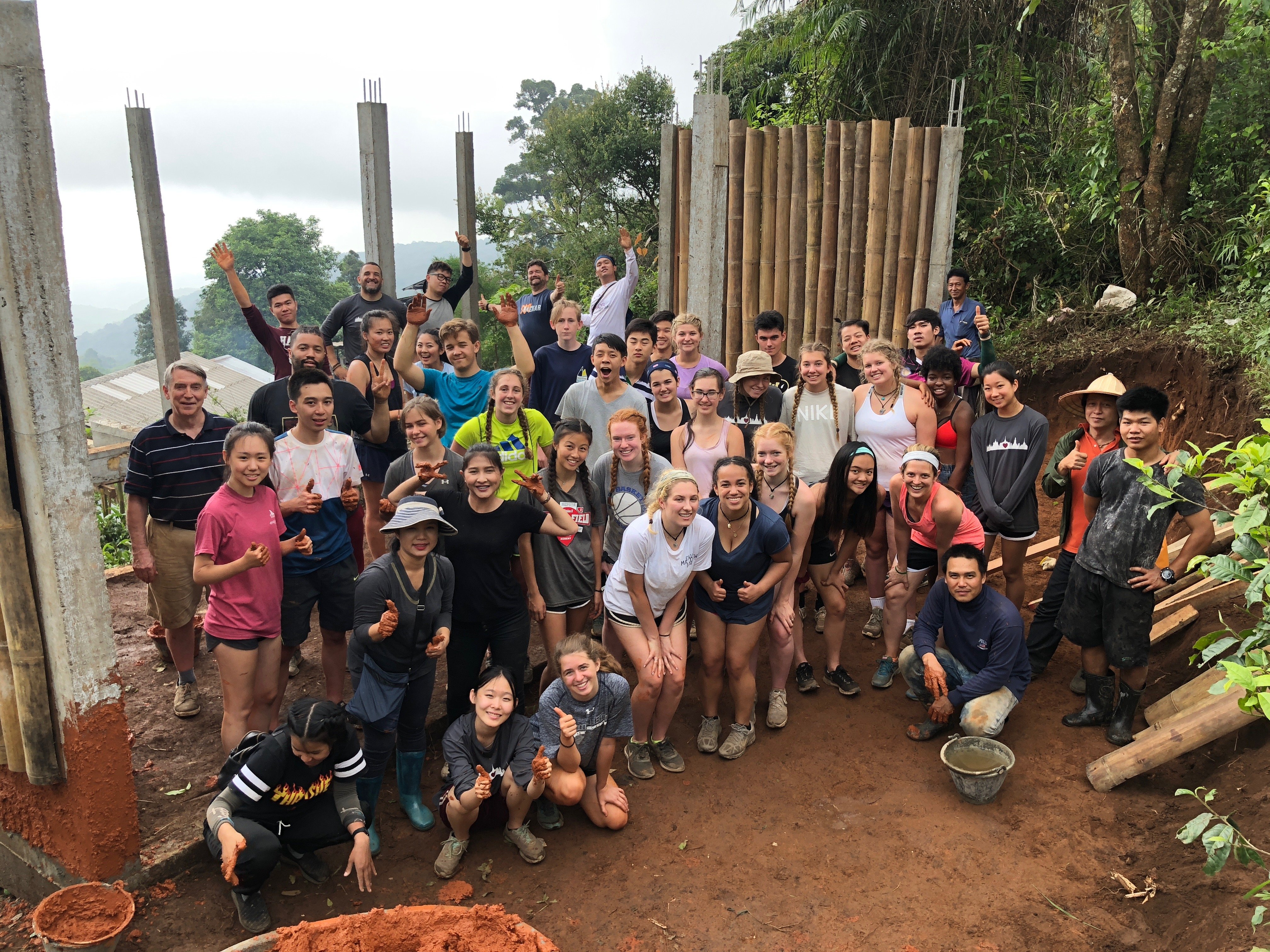