This morning, we had our usual breakfast of eggs with rice and beans with the fun surprise of some cereal, which was really great paired with the cacao nibs made on the farm. Once everyone finished up, we headed to the classroom for our morning session of science. Pinto explained to us the morning task of harvesting fungus gardens from incipient atta and acro colonies. After detailed diagrams were given on the whiteboard, we set out to Henryʼs Farm, a nearby harvesting site, via the main road on the Finca. We stopped to look at some example colonies of all sizes and of both types of leafcutters. Allan dug up a majority of the examples to give a real-life demonstration of harvesting. The attas build up their mounds in open clearings, but the acros choose existing environmental entities, such as a crack in a tree or a stump, to start their colonies. Incipient colonies are fewer than two years old and thus are relatively small, maybe one or two chambers. If they can survive past those first years, they rapidly expand like one of the atta colonies we saw. This large colony was about the size of the labyrinth at school and had openings that functioned as entrances, exits, and ventilation systems. Pinto made the ants mad, so all the soldiers came out of the exits to fight us. The soldiers have large mandibles which make their bite strong enough to cut through a leather shoe--and certainly flesh! Fortunately, none of us were bitten, but Pinto suggested that if we find ourselves with open wounds and atta soldier ants, we can use them to seal up our cuts. He demonstrated by having one latch onto his shirt and popping the head off the body. Finally, we made it to Henryʼs Farm and split into our groups to try it on our own. TSA struggled with the task not because of a lack of talent but because of deep colonies. With the help of Allan, we dug up and then abandoned two colonies. Finally, we resorted to harvesting from an atta colony that also had fire ants in it! Allan was the only one who got stung excessively, but I also got one sting on my pinky. I will be accepting bravery awards when I return.

As the last group to return, we went straight to lunch where we ate spaghetti and garlic bread. The juice of the meal was starfruit juice, which has been my favorite so far. 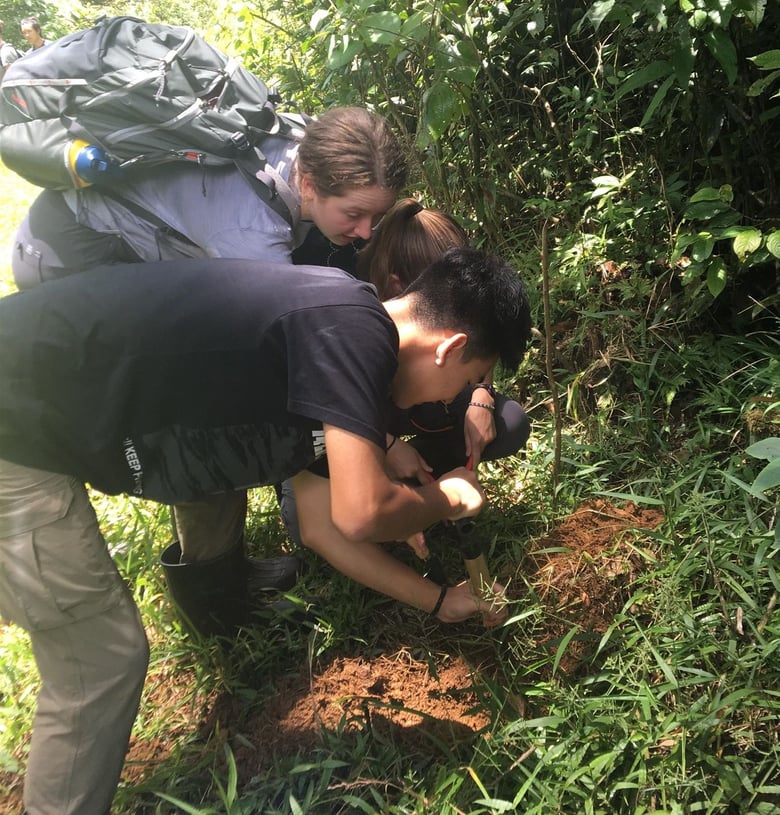 After lunch, we went ziplining. It was a 20-minute ride to get there. We started climbing the mountain in order to get to the starting point of the zipline. Although the weather was hot, the view up at the mountain was pretty. We were a little nervous at first, but after trying the first part of the zipline, we all started to love it. We enjoyed the cool wind blowing by our ears and the spectacular views below us. After ziplining, we all went to the butterfly farm. The farm provides job opportunities for local women. The women there take care of caterpillars and butterflies in two separate labs. We first visited the caterpillar lab. We saw different stages of caterpillars from the tiny larvae to the pupae stages. We also got a chance to learn about how the butterflies mate and their special lifestyle. After dinner, we ended the day by analyzing our bacteria samples from yesterday with statistics and by making the ant colonies nice homes in plastic boxes.

To stay updated with all the blog posts from this Costa Rica trip visit this link.