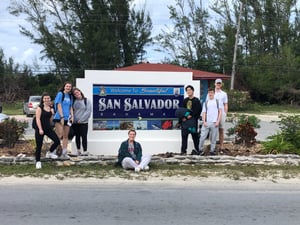 Two groups of students will spend their March break in San Salvador, Bahamas, snorkeling and enjoying the warm waters and sunshine, and working very hard! They are creating Tabor Academy’s first coral reef nursery. This year’s REEF trip will catalog the species of coral in the area, do some genetic testing to find disease-resistant species, and then take fragments from these healthy corals to grow in our nursery on PVC “trees” anchored to the seabed. When we return next year, we will hope to “plant” these more mature corals in the seabed, rebuilding an area of damaged reef.

After a few early morning flights, Tabor students and faculty landed on San Salvador Island around 1:00 pm. After a quick truck ride to the Gerace Research Center, students were orientated to the rules and regulations of the university as well as the mission and goals of the research facility. The students then hustled back to their rooms to change into their swim-suits and walked across the street to take our first swim. Little did we know we would be so lucky to share our first swim with four dolphins. Not too far off the shore, our students swam and played with the dolphins as the sun set on our first night in San Salvador. After a quick change and some downtime, we ate a family style meal, discussing the highs and lows of our day, sharing the dolphin swim as an agreed upon favorite moment. We concluded the night with a team meeting on the objectives of the coral reef nursery project and a plan of action for the week to come.

Time for us to get snorkeling! The group ventured to French Bay to perform an offshore snorkel. The group did an impressively good job staying together and managed to find one living Elkhorn coral. We came back to the Gerace Research Center for lunch and headed to the lab to work on the coral tree. The students sawed, sanded, and measured a number of pipes to begin constructing what will be a 6-foot tree. Ending the night with a family-style meal and a bonfire, the vibes among the group were positive that this was going to be a fun and adventurous trip.

The girls on the trip met the sunrise with a yoga practice, while Ross and Chris ventured out for a run. The group met under the pavilion for a 7:30 AM breakfast where we planned out our morning adventures. We packed our gear, boarded our truck, and headed to the local marina. We met our new friend and boat captain, Tony, born and raised in San Salvador, who is an expert on the local marine life. Captain Tony took us out to Long Bay where the group did their first open water snorkel dive. Split into three groups, the students located and recorded the location and condition of Elkhorn coral. We are happy to report we charted two living half-meter pristine class three Elkhorn corals! As we made our way back to the marina, Captain Tony whipped the boat around, directing everyone’s attention to the water below us. A hammerhead shark! Another day in San Salvador and another marine animal to check off our site list!

We chose to celebrate our success with a trip to Grotto Beach for the afternoon. Upon our journey to the beach, we stopped at a local grocery store and stocked up on goodies for a picnic lunch. The group spent the afternoon in crystal blue waters enjoying some free time to soak in the sun, jump off surrounding rocks, and snorkel the shores. Surprisingly, Dr. Crosby, John Ho, and Chris Mills found some healthy Elkhorn coral on the reefs surrounding Grotto’s shores, manifesting our plan for the coming days. We returned home for dinner where we completed our daily “cookies and crumbs,” the highs and lows of our day. The students scurried off to the lab after dinner where they cleaned the equipment, sifted through photos and ideas, and downloaded material. We concluded the evening with a group bonfire on the beach across the street.

Another beautiful morning of yoga and running, though a storm was certainly brewing. After a tasty breakfast, the team ventured back to the marina with a packed lunch for a full day on the boat with Captain Tony! We traveled back to Grotto Beach to reassess the coral spotted yesterday. Split back into our groups, we logged up to seventeen healthy Elkhorn corals. Mr. Cassista found a healthy piece of Elkhorn coral laying on the ocean floor. Logging its location, we brought the piece onboard for tissue sampling for use as fragments for the coral tree. We ate lunch on the boat as Captain Tony navigated us north of Grotto to continue our search. Today was not only successful in locating coral, but also in spotting a variety of marine life. We spotted a six-foot barracuda amidst coral, a large lionfish and stingray, a humpback whale finning on the horizon, a number of trumpet fish, a reef shark, and as we pulled back into the marina, two nurse sharks greeted us. Upon our arrival back to the Gerace Research Center, we unpacked the gear and headed to dinner to complete our daily “cookies and crumbs.” Cookies varied from the marine life spotted to the successful discoveries of coral. The crumbs included sunburn related complaints or fear of the fish spotted. The evening concluded with Rachel’s impressive performance in Mad Gab, though the girls could not perform well enough to beat the boys in the game. Looking for a rematch soon! The group completed another photo download and set sights on tomorrow morning when we will complete the construction of the coral tree and assess the Elkhorn we rescued this morning for disease resistance.

A little bit stormy today on San Salvador. A day for the lab! We worked diligently and extensively to finish the building and preparation of the coral tree. Chris and John power drilled holes through the elkhorn coral we had preserved in the touch tank, here in the lab. Olivia and Anna collaborated with the other members of our team to ensure the tree branches were secure and our zip ties were ready for deployment, with the hope of implanting the tree at Grotto Beach tomorrow. The group worked to organize our photos and videos while also updating our log. The afternoon included a trip to the grocery store and the night ended with another game of Mad Gab.

We set out with Captain Tony early this morning, towards Grotto Beach, with high hopes of securing our elkhorn coral tree. Battling big waves and a strong current we made it out to the planned place to plant, however, the conditions were simply too rough. Slightly discouraged yet safe, we turned back towards the marina. Captain Tony steered us towards Snapshot Reef on our way back to observe vibrant schools of fish. Chris and Ross were enthused to see another barracuda while the girls on the boat saw another stingray. Upon our arrival back to campus, we brainstormed our next move. Mark, the facilities manager here, offered to drive us to a cave on the island located right next to the beautiful Dixon Hill Lighthouse, overlooking the island. We trudged through the wooded trail first to find a hole in the ground with a ladder resting on the side. The group navigated their way down, where Mr. Cassista, Georgia, John, Chris, Olivia, and Ross ventured through the cave water to explore the insides. They reported seeing various crawling critters. The only downside of the exploration was one lost flip-flop. Upon the groups surfacing from the cave, we followed each other up to the top of the lighthouse, taking in the panoramic view of San Salvador. The night concluded with a group basketball game and a round of “spoons”, an active card game.

SUCCESS! What a day of accomplishments, creating an ideal last day for our first group. With all of our equipment set to go, we ventured back out to Grotto Beach with even higher hopes of planting our elkhorn coral tree. We struggled at first to set the anchor, sending vibes throughout the group that this may just not happen today, again. The anchor was seizing to the driving pole, they were fusing together and every time they went to remove the rod, the anchor would not stick. After numerous efforts, Dr. Crosby and Mr. Cassista encouraged us all to swim back to the boar to regroup. Mr. Cassista and Chris swam ashore in pursuit to find metal rounds to assist in the anchoring of the tree. After some lunch, the group re-energized themselves for another try. Our efforts still did not work. Floating behind the boat, the group brainstormed ways to assist the process and prevention of the fusing pieces. Napkins? Mayonnaise? Cheese? Deli meat? We were clearly still a bit hungry. The think tank allowed for Dr. Crosby to remember he has silicone in his bag. With a little bit of plastic from the cheese and the silicone, Mr. Cassista swam back out to try again. With a few staying behind on the boat to catch their breath, after a few minutes of effort, cheers rang across the ocean. The anchor stuck! Time to hang the coral! Everyone swam back out to the secure tree and one by one dunked down and zip-tied the coral to the tree. Success! After some celebratory jumping off the front of the boat, we headed back to the marina. We made a pit-stop at the local grocery store to purchase ice-creams and necessities for a beachside barbecue. The group banned together to build a fire and cook chicken and corn on the shores of the beach across the street from The Gerace Center. As the sun set on our last evening together, we engaged in our last round of cookies and crumbs, concluding with our overall cookie of the trip. Chris Mills ‘19 can be quoted saying, “If you were to tell me four years ago that I would be in San Salvador, drilling elkhorn coral fragments in a research lab with a freshman from Shanghai, China, I would just not believe you. That is what Tabor offers you.”

As one group spends the morning to depart, the other spends the morning pack to arrive. Group one spent their last moments on the island uploading final pictures, sharing favorite memories and returning their dive gear to the dive shop. Dr. Crosby, Mr. Cassista and Ms. Parente anxiously await the arrival of group 2! Group 2 finally arrives, and Mr.Cassista and Mr.Crosby as well Troy Dexter, the director of Gerace, welcomed us to the Bahamas, and piled us into the “sketchy” truck, which was actually completely competent. The truck took the group to the Gerace Research Center, where we would stay. The eight of us unpacked into our rooms and could not wait any longer to jump into the ocean! We swam at the beach as the sun began to set before heading to the cafeteria to eat dinner. We then had an introduction meeting led by Troy, the research center director, who provided the basics about the program (and some helpful do’s and dont’s.) Finally, we grabbed our gear, which included a wetsuit, mask, snorkel, fins, and underwater flashlights, and walked across the street to the beach where we night swam. We spent some time in the dark exploring below the shallow water and sea life, feeling out our new gear, using the flashlights the program provided us. We shared our excitement around the bonfire together, getting to know each other. After a positively overwhelming day, we went to bed!

Be sure to check back to see more photos from our trip!