A Test of Leadership

Last year, I attended the Hurricane Island Outward Bound School, where I spent 15 days canoeing, rafting, and backpacking the beautiful Maine wilderness. Outward Bound focuses on building your moral character, self-worth, and teaching you the importance of interdependence with others, all through outdoor voyages.

My first day began by arriving at Base, located in the Middle of Nowhere, Maine, and meeting the only people I’d have an interaction with for the next 15 days. Throughout the trip, we would develop a trust and a friendship unlike anything any of us had experienced before, but of course, none of us knew each other then, and after playing one of those awkward name games, we began our “duffle shuffle” which meant preparing and packing our bags for the trip.

After separating and rationing out our clothing and food we would need for the next week, our packs were about the size and weight of a 12-year-old child. Later that night, we were given a rough layout of the trip, and roles that we would rotate through every day: leader, navigator, cleaner, cook, and a few other minor ones. We went to bed that night full of anticipation, fear and excitement for the next 2 weeks.

For the first 7 days we canoed. Through our sunny afternoons and days spent along the shores of beautiful lakes, we quickly got more comfortable with each other, and began to get more effective at traveling and functioning as a group. But things quickly changed with the portage, as that was the first real obstacle our group had to overcome. For those of you who don’t know, portaging is carrying a boat between two bodies of water. That didn’t sound too difficult to us at first, until we realized we would each have to carry an 87-pound canoe on our backs for 4 miles, while also having to stop, and go back about every mile or so to retrieve our packs. Everyone had been dreading that day ever since we’d first heard about it, including me, and of course, my role for the day turned out to be leader. 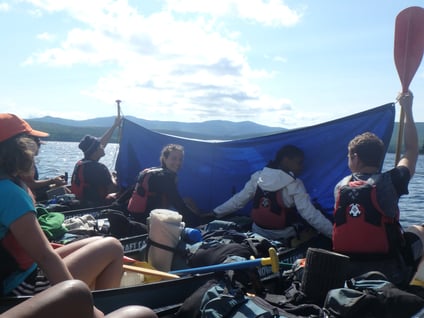 That day, we got up at the brisk hour of 5:00 AM, quickly packed camp, and paddled for about an hour to our portaging start. During that time we discussed the best ways to distract ourselves from the pain of carrying the canoes. Some pairs decided to tell embarrassing childhood stories, others bad jokes.

We began portaging at around 8, and quickly realized we could only carry the canoes for about a minute and a half before it became too painful and we had to switch with our partners. So, every minute and a half I would yell Stop. Switch. Go. We walked about 30 minutes with the canoes before we decided to stop and retrieve our packs to give ourselves a break. At this point we had probably gone about half a mile but everyone was already in a bad mood, and complaining about having to portage for the rest of the day. My job was turning out to be more difficult than I had anticipated. Not only did I have to mentally motivate myself to keep going, but I also had to constantly motivate everyone else. That was the first time everyone realized that the physical aspect of this challenge was difficult, but not nearly as difficult as the mental part of forcing yourself to continue moving and not to give up.

About halfway through the portage, I noticed some groups were starting to fall behind. Some had never been physically pushed to this degree before and were having trouble actually carrying the canoes. One girl started to feel excruciating pain in her shoulder, which made it impossible for her to carry the canoe for longer than 20 seconds. What amazed me was how quickly members of the group stepped in to help. Some who had a slightly easier time carrying the canoes, switched partners with the people who were having trouble, and took triple shifts carrying the canoes. Others, who were barely getting by on their own, would try and cheer everyone on, even though all they wanted to do at that point was stop. It was in those moments, when you’re completely mentally and physically drained, and you stop feeling pain because your whole body is numb, that you realize who you truly are. That’s when you learn how you act under pressure. Your best and worst traits get laid out on the table for everyone, including yourself, to see. It’s when you’re truly vulnerable. But it’s also in that moment that you surpass all of your limits and expectations you have set for yourself. That’s when you learn that working together is the only way you’re going to be able to achieve your goals. 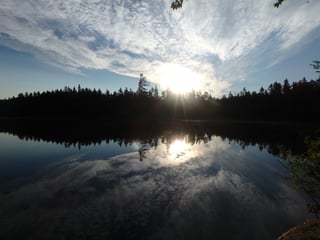 We finally reached the campsite at around 6:00 PM, and after setting up camp, and having dinner we sat down for our daily evening meeting. As the group processed the day, I realized that one of the main reasons I was able to be an effective leader that day was because of the support from my peers. Getting to know them for the first week allowed me to gain their trust, and respect, which in turn made me be able to successfully lead them through the difficult challenge. I had never been more grateful to have those people by my side, because you’re only as good as the people around you, and that day, they made me great. And yes, that was one of the hardest days of the whole trip, but the experience I gained, and the things I learned about my teammates, and myself made it by far my favorite.

Tabor Academy, through the generosity of an alumnus, awards an annual grant for a rising junior to attend the Outward Bound School each year. It always proves to be an influential life experience.