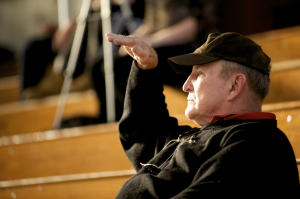 Dick Duffy will retire this spring after 46 years on the Tabor faculty. A member of the Tabor Class of 1956, “Duff” returned to his school by the sea in the fall of 1969. A stalwart member of the history department, Duff introduced the Advanced Placement Economics course to Tabor along with teaching both U.S. History and a popular elective entitled America in Vietnam.

Arguably Tabor’s most ardent sports fan and strongest supporter of Tabor’s athletes, Duff served as head coach of varsity baseball for 33 years as well as the intrepid leader of the JV football team for 18 seasons. Many of the athletes who played on his teams have credited Duff for the special care and attention he provided to them, and for turning them into the men they are today. Additionally, Duff was one of Tabor’s first deans and for 18 years the houseparent in West House. In a career that has spanned four of Tabor’s nine Headmasters, Duff’s presence has been a prominent feature of the Tabor experience for parts of six decades. 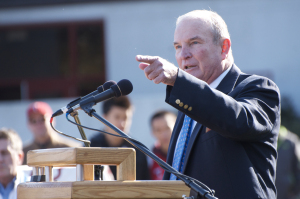 Duff’s impact on generations of Tabor students and his passionate support of Tabor athletics were recognized three years ago with the naming of the school’s athletic turf field complex in his honor. T-Shirts for the students were created for this event with the quote on the back: "Grass doesn't grow on the JV field" to recognize the tough practices Duff was known to conduct.

We know we will continue to see Duff along the sidelines at baseball and football games, encouraging the refs at basketball games, and wearing his hat, gloves, and vintage Tabor coach’s coat in the Travis Roy Rink; it will not seem right if such is not the case. 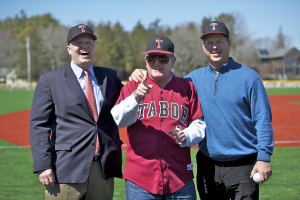