Last spring, Hailey Kim and I found out that we were to be the co-leaders of the first-ever Tabor GAINS Club, a national club with the objective to empower girls and further the entry of women in STEM careers. Never had I imagined myself being in a leadership position, the girl with a deathly fear of public speaking! However, soon enough, Hailey and I began brainstorming ideas over the summer, trying to navigate the logistics of starting and running a club. Hailey wanted to build 3D printers from kits, having done it at her previous school. We decided it was a good plan and discussed donating two printers to the middle school-aged girls at Our Sisters’ School in New Bedford to further their interest in STEM. We talked it over with Mrs. Eugenio, the head of the STEAM program at OSS, who agreed it was a nice idea! Several emails and hours of FaceTime later we finally had our plan. We would build and donate two printers from kits with the help of our members and Dr. Kistler, the director of Tabor’s Maker Lab. 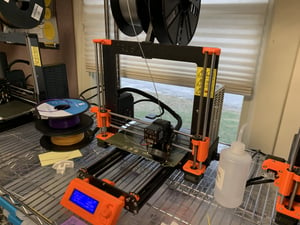 While we waited for the two kits to arrive, Hailey and I tried to figure out how to juggle the difficulties of creating a convenient schedule. I quickly realized that running a club was not as easy as it sounds. When the printers finally came in I further realized just how inexperienced I was when it came to building things, having only ever helped assemble an IKEA couch. Hailey and I split the club members into groups of three that rotated every other week with both of us joining each session to supervise and help build. Showing up every week was not easy with our schedules, but soon enough, building the printers became a highlight! We turned up the music in the Maker Lab, singing along to songs, though decidedly off-key, while simultaneously performing the screw pulling technique and attempting to perfectly mirror the instructions. Dr. Kistler generously brought us donuts, gummy bears, and snacks for every meeting, which quickly became a crowd favorite. Along the way, we faced many obstacles, such as the several times we made a tiny mistake which forced us to reconstruct whole parts of the printer we had just spent an hour assembling. Finally, shortly before spring break, we completed the printers after hours of long, hard work, making plans to deliver them after our return.

Our plan was then to start on our second project, bacteria art, with the generous help of Dr. Crosby shortly after we returned from vacation. However, our plans were completely turned around...not by bacteria, but with the outbreak of the novel coronavirus. With COVID-19 separating us from the MakerLab, we had to figure out how to move our club meetings to a virtual platform. Luckily, the GAINS network is run online through their website and app that keeps everyone posted about ongoing events such as career panels, activities, and tutoring groups. We also learned when we got back to classes that Dr. Kistler was using our printers to help construct NIH approved face shields for healthcare workers in the Boston area and local first responders. Had you seen me when I discovered this news you probably would have thought me crazy. I was jumping around my room, thrilled that our printers were being used to help the community after feeling helpless for so long.

Although many of our ideas have been put on hold, such as donating the printers and working with the girls at OSS, Hailey and I have been actively working on where to take the club next year.  If you would like to stay updated, please follow us on Instagram @gains_tabor where we will be posting our events and activities. And finally, if you are a girl interested in STEM or simply interested in what we do, we would love to have you join our club and continue our journey with us next year.