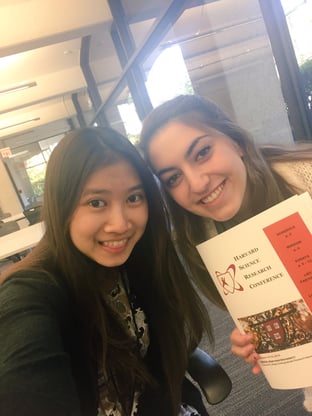 Having always been a science geek my whole life whose dream is to become a researcher, I was intrigued when Mrs. Norris announced that there would be a research conference at Harvard University to which high school students could apply. After a week of anticipation (though it felt more like a year to me), I received an email titled “Harvard Science Research Conference Acceptance!” and was not able to contain my scream during study hall in the library. Yes, it was awkward, but that was how excited I was, knowing that I would have the privilege to attend the 2016 HRSC.

So what was the conference all about?

Mesmerized by the wonders of science presented at the conference, I ate through almost 60% of my notebook with scribbles that would not be legible to anyone but myself, eager to capture and submit to memory the major and minor details that overwhelmed me with awe. Here, I have summarized those 31 pages from my notebook to give you an idea of what I experienced during the 2-day conference.

Some of my favorite keynote presentations by Harvard professors and students were: 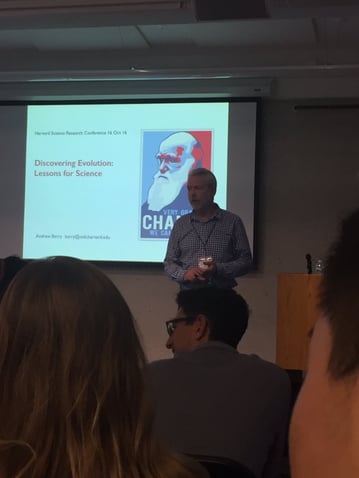 After each day’s keynote presentation, we were divided into discussion groups led by Harvard graduates who specialize in specific fields of research. We asked questions about life as a researcher, inquired about specific fields of science (e.g. cancer, genetics, chemistry, environmental science, stem cells, etc.), strike up a conversation about the newest scientific technology or simply listen to the discussion and explore our interests. In one of these sessions, we explored some of the fundamental scientific questions such as the origin of life and the mechanism behind the mind’s working. After some pondering, we came to a conclusion that in order to answer these major questions, smaller questions need to be addressed and that that is, in fact, what scientists aim to do - to answer sub-questions that shed light on the bigger question and may one day lead to the explanation behind even the most vexing questions such as that of the mind and life itself.

Having a chance to listen to and interact with some the most notable researchers at Harvard Science Research Conference was an invaluable experience. Not only did I get to hear in great detail the processes and implications of fascinating scientific discoveries from the people who made the discoveries themselves, but I also gained a deeper insight on what it is like to be a scientific researcher. In a personal conversation, one of the Harvard graduates working in Harvard’s cancer lab said to me, “Being a researcher is all about being curious. Even the most trivial questions asked by little kids can inspire a research. When you’re inspired, you start using all that you have, integrating physics, chemistry, biology, math and even English to answer that question. The most awesome thing? You become obsessed with your project and have fun along the way!”