As one of the co-heads of Tabor’s Gender-Sexuality Alliance and organizers of our upcoming Pride Week, I wanted to share my experience within the LGBTQ+ community and why Pride is so important to me. 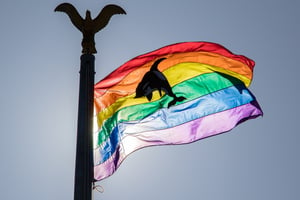 While Pride applies to all identities, just two of which include sexuality and gender, I can most honestly speak about sexuality as a cisgender, bisexual woman. The Merriam-Webster dictionary defines sexuality in a multitude of ways, but the two most relevant definitions for the purpose of this post, are "a person's capacity for sexual feelings" and "a person's sexual orientation or preference." Though we cannot see sexuality on the outside, whether straight, pansexual, or gay, we identify with sexuality one way or another.  Sometimes, I feel this gets lost within us; as an LGBTQ+ identifying activist, I am constantly reminding everyone that they have a sexuality and that they should feel free to express it.

My story goes as follows: I was one of the kids who knew they weren't straight before I knew what straight was; in fact, my first crush was on a girl. I could explain every detail that pushed me in every direction along the way, but instead, I want to explain why I now feel so comfortable in my own skin, as a bisexual young woman.

I had run-ins with discrimination from a very young age, even before I officially "came out." For example, when I was eight, proposition eight against gay marriage was being proposed in my home state of California, and I started being taken to protests with my family and friends. I will never forget the moment in which a woman pulled up in her car and called us sinners among a slew of other slurs before she drove away. From that point on, I continually fought for LGBTQ+ rights within my state, and stood up for my friends who identified. I understand the struggle and importance of being an ally because, for a short time, I presented myself as one. This is why I am forever grateful to all those who support the LGBTQ+ community and other causes despite the fear of being discriminated against or harmed for their ideas.

I came out as bisexual and faced a lot of harassment from my friends in middle school. When I came to Tabor at age 13, I hoped that would change. However, I did notice some commonplace anti-LGBT rhetoric, such as the use of the phrase "that's so gay" or even the derogatory "f-word.” Unfortunately, I was outed early on in my freshman year, providing me even more motivation to get involved. The Gay-Straight Alliance was barely present on campus, so my sophomore year, I decided to make it my goal to become active in the GSA and help make Tabor a more welcoming place for LGBTQ+ students like me.

After attending "gay camp" in Los Angeles over the summer of 2016, I reunited with my co-head of the GSA, Charlie Dineen, and we started re-building the foundation of Tabor's GSA. We renamed it as the Gender-Sexuality Alliance to make it all encompassing. We tackled the inherently anti-LGBT 2016 election with love and acceptance, and held our first Pride Week last spring, where we participated in the Day of Silence and other activities. 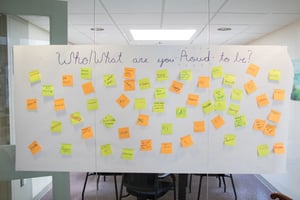 This year, we are holding Tabor Pride Week 2.0 April 23-27. We have found that as the presence of clubs like the Gender-Sexuality Alliance, I Am That Girl, and the Black and Latinx Student Union grow, so does acceptance, participation, and activism on our campus. We will be working with these clubs to produce a Pride Week that encompasses intersectionality and pride across all spectrums, as well as an overarching theme of empathy for others. On Tuesday, we will hold our intersectionality discussion with the BLSU and IATG, and on Thursday, we will be participating in the Day of Silence.

Our official mission statement for the week goes as follows: "We want the student body to have a collective celebration of identity and provide opportunities to educate our community on matters of diversity, highlighting the LGBTQ+ community. Through education, we hope to spread awareness and further this community’s empathy for the LGBTQ+ community, and overall, for each other."

We are so thankful for the support from the administration, faculty, staff, and student body to make this week happen. We hope to continue this tradition and pass the baton of leadership down through every passing year at Tabor. We believe that Tabor can be the most accepting and empathetic community when we all educate ourselves, and one another, and extend an open hand to our neighbors.

I'm proud to show my colors at Tabor. We still have a long way to go in terms of acceptance of the LGBTQ+ community, but I have grown strong and proud here. My hope is that other LGBT-identifying students feel the same way.