Sending Our Son Off to College

Last year, I wrote a blog in which I described the various college tours I did with my son during the summer prior to his senior year at Tabor. At the time, the thought that he would be leaving our house in late August for Orientation at one of these colleges was purely theoretical, but sure enough the time came to make the drive to campus, watch current students unload the car like it was a NASCAR race (93 seconds by my watch to get all of his stuff from the car to his room), and then listen to the President of the College give the “Welcome” talk followed later by the Dean’s “It’s time for you to leave” talk. Before I knew it, I was back in the car heading home while my son was joining his “squad” of First-Years to begin a seven-day Orientation. 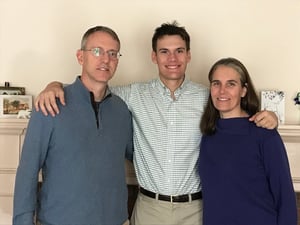 As I reflect back on the college process for my son, my first takeaway is how fast it all happens. At the time, of course, everything seems like it is going in slow motion. Every college tour, standardized test, college essay, and application seems to go by in slow motion, but then things seem to pick up speed very quickly and all of sudden we’re planning how to transport him back-and-forth for Thanksgiving. For sure, having our son go away to college and becoming empty-nesters has been a shock to the system, but I have to say that Tabor did a great job preparing us -- and him -- for the transition.

The senior year moves extremely quickly, but there are milestones that helped us all prepare for the inevitable. There were the Senior Days in athletics, Tabor Day, Lessons and Carols, 100 Days Dinner, class trips, Senior Parent Dinner, “Move-up Day,” Baccalaureate, Prom, and finally Commencement -- among other events -- that helped to make our final parting more of a celebration than mourning. In short, the process worked. Tabor held his hand when he first arrived as a student, giving him support when he needed it, and then gradually allowed him to become more independent as he moved from his freshman to his senior year. By the time summer rolled around, he was ready to leave home and we were ready to let him go.

It has now been three months since our son left for college. During that time, he has often volunteered that because of his Tabor experience, he was ready for whatever college threw at him. As for us, my wife and I have found solace in knowing that our son has the tools to succeed -- and we have taken advantage of his absence by doing more things together. Interestingly enough, I feel like I am back in college myself, following his college’s athletic teams (sometimes with him at the game and me streaming on my computer and texting commentary back and forth), watching campus lectures on my computer (Ruth Bader Ginsburg recently!), and reading the weekly emails and quarterly magazines from the college very closely. As for contact with our son, we have a standing appointment every Sunday night to connect via FaceTime where we share the highlights of the week; we also regularly exchange texts to share news. In the end, we feel confident that Tabor did its job as a school and we did our job as parents. It is now up to him to find his own way in life...exactly the way it should be!