Physics Doesn't Have to be Rocket Science!

by Rob Hurd and Erica Lunn '16

Rob Hurd: Last February, my son competed in the cub scout Pinewood Derby.  We had a blast making his car, which turned out to be very fast – second by an inch in the district.  A far cry from the pinewood derby car that I made with my dad years ago and not too shabby when your dad’s a physics teacher. Despite the fact that the pinewood derby is an elementary school project, there was a surprising corolation to the study of energy conservation and rotational motion, topics that the regular physics course was studying in November through January.  Last spring, in the two weeks between the AP physics exam and graduation, I experimented with the Pinewood Derby project in my A.P. class.  They embraced the challenge and using data gleaned from that experiment, I created the Pinewood Derby project as a hands-on assessment exercise for this year.  This project-based assessment related well to the topics taught this quarter.  It may seem simplistic to some, but physics doesn’t have to be rocket science.

Once all the grading was done, the top two from each class raced off for bragging rights and an Uncle John’s at the Beebe renewable gift card (thank you Uncle John’s for providing those).  In the end, it was Erica Lunn ’16 who out-performed all of her peers. Here are some words from her about the experience: 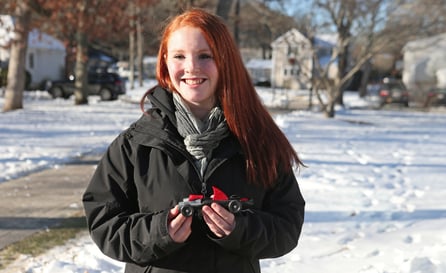 Erica Lunn: As part of the second part of our semester assessment exercise in physics, we were asked to design and build a pinewood derby car from a kit given to us. I had a small pinewood block, some nails, and wheels. Before I started designing my car, I began researching and searching for images of the best design for a fast pinewood derby car. During my search, I found a picture of an orca pinewood derby car, and I knew my design right away-- I was going to make a Seawolf!

The body of my Seawolf is designed to be very streamlined and lightweight. A dorsal and tailfin was added onto my car. I knew this could hinder my overall speed, but these features are essential to represent my Seawolf. The colors are symbolic of Tabor pride. I painted the base black with spray paint like an orca. The dorsal and tailfins, along with the TA on the front, are painted red with regular craft paint.  I balanced out the center of mass by sticking on chassis weights to the back of the car so it could balance on my finger about an inch in front of the rear axel. One wheel is raised which helps the initial start up speed and the canted wheels reduce friction, proving a faster speed as well.

We used many tools in the process, including a table saw, power sander, file, handsaw and a palm sander. It was quite difficult to put the wheels in, and making them canted was very difficult. In the process, I ended up splitting my wood, which meant that I had to use wood glue to make some repairs. Finally, I used powdered graphite to lubricate my wheels and axels. The whole process took quite a lot of work—about five days of one to two hours of work each night to complete.