Musings from the GAINS 2020 Conference at UPENN

Tonight we arrived in Philly! We were met by the beautiful train station, then a blast of cold air. 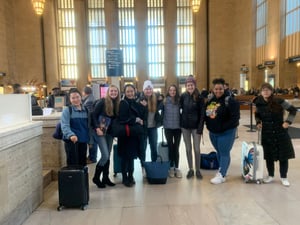 Taking a trolley to UPenn, the GAINS conference was kicked off with opening remarks from the wonderful people behind the event, including Ann Decker of Greenwich Academy. Our first keynote speaker was Dr. Frances E. Jensen, an accomplished neuroscientist (to say the least), chair holder at the University of Pennsylvania, and writer of the book, The Teenage Brain.

All the girls then had dinner in the planetarium/screen/dome (not sure how to describe this one, basically, my astronomy dinner party dream) and mingled with each other. I personally met girls from Pennsylvania and Greenwich, and we bonded over a three-course meal, sharing our interests and stories.

Finally, after a stop at Wawa, we tucked in for the night in our soft new GAINS sweatshirts. I cannot wait for the next day, and I know all of us Tabor students feel the same. It just feels good to be here, surrounded by empowering women.

I took the shuttle to a spacious, updated warehouse in Philadelphia where Exyn Technologies is located. Denise Wong, the company’s Robotics Engineer who has a PhD in Mechanical Engineering, introduced the company and explained the basics of how their drones operate. Exyn Technologies’ goal is to eliminate the human risk in dangerous situations by developing drones to carry out complicated missions. The drones have a laser on top that scans their environment, allowing them to maneuver without human input or GPS. Nour Hussein, the Robotics Software Engineer, then explained that the drones can detect the presence of moving objects such as humans and cars. Part of what makes the robots successful is their ability to forget what they just saw so that they can maintain the most updated view of their changing environment. However, the drones cant see beneath them and thus are unable to land without a human giving it the appropriate coordinates. At least one of the drones has been sold to a European mining company and Exyn plans to continue improving the robot’s design and capabilities. 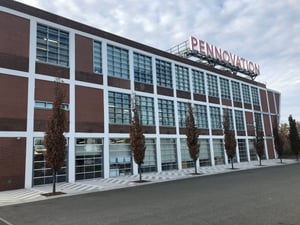 Genevieve Moss-Hawkins told us that the Pennovation Center is the UPenn owned incubator for small business start-ups. Businesses can rent spaces and lab benches. One of the companies we encountered was Avisi, which is in the process of testing their nanoscale prevention of blindness resulting from glaucoma. Among the many other companies are Limelight Bio, which develops gene therapies, PhylloZymes, which is exploring alternative ways to get vaccines in parts of the world where refrigeration may be more challenging, and Zero Eyes, which is using artificial intelligence to improve security. Genevieve also mentioned that of all the companies within the Pennovation Center, roughly 60% of them have female leaders.

The Working Dog Center is a facility that works with dogs for two major purposes. The first purpose is to help facilitate and grow a dog’s ability to sniff out cancer. They do this by collecting blood plasma from three groups of people: people with cancer, people with benign tumors, and people who are either healthy or have other diseases. For the experiment, they set up the three samples of blood plasma with the help of three assistants. They then have the dog go out and sniff each sample. Before the experiment can start, they must train the dogs to signify when they have found the cancer sample. They usually have the dogs stand in front of the sample for at least 5 seconds before calling the dog back and giving it a treat. The other purpose of this center is to train dogs for Search & Rescue missions. For this, each dog is assigned a handler, who helps get the dog in shape. They set up scenarios in which the dog may need to save someone. They showed us a course they had set up in which a trainer hid inside a container which was surrounded by obstacles that made it harder to get to. They released the dog and we saw it figure out how to get to the container and sniff out the “victim” inside. They have the dog bark a certain amount of times before they reward the dog with a treat. 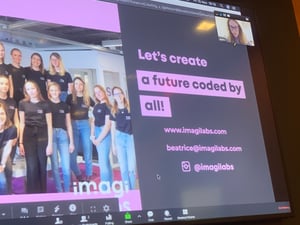 We visited the McKay Orthopedic Research Lab where we were able to meet and hear three grad students of U Penn present on their research at the lab and their experience as Ph.D. Students. They each were involved in a different research project, one of whom was working towards repairing damaged tendons through mechanical engineering. After we heard about each of their own paths to grad school they led us on a tour of the huge, impressive research lab. During the tour, we were shown each of their research spaces and able to look at cells and a rat tendon through a microscope.

CAAM at the UPenn Museum (Hannah Watt and Grace Mead)

Our group was welcomed by Dr. Marie-Claude Boileau, the Laboratory Coordinator in The Center for the Analysis of Archaeological Materials. We got a “behind the scenes” look at museum research from a variety of archaeologists, including a Peruvian mummy, a seed found at one of the oldest Homo sapien sites, and a huge collection of animal bones. (Grace) My personal favorite part was Dr. Marie-Claude’s ceramic analysis. With high tech microscopes, she identifies the elements present in tiny shavings of ancient pottery, and using her geology background traces where they may have come from. In addition, she takes x-rays of the pieces to determine the sculpting technique (for example, whether a foot was added in later) without harming the art. This experience was a perfect culmination of my love for art and science.

After a quick presentation about the Levine lab and the Drosophila (fruit fly) by a postdoc at U Penn, we then conducted a simple experiment in which we tested to see how Drosophila originating from different parts of the globe handled cold shock and how well adapted the flies were. After this, we walked to a couple of the lab spaces and got to look through microscopes at different mutations of the Drosophila and hear from a grad student about her work in the lab with the fruit flies. It was amazing to see her lab and hear about her project involving the Drosophila’s winter adaptations and lifespan.

We went into the wet lab where four researchers (including undergrads, PHDs, and professors) are working on coral reef bleaching. First, the girl gave out a quick introduction about why coral reefs are bleaching. We learned about the stress conditions of the coral reefs, and these great scientists are trying to find the best “thermotolerant” genotype. They are actually not working on corals, but instead a close relative with very similar genes (just like we test on mice instead of human subjects). We watch the distinct color difference between a bleached coral and a healthy one under the telescope. The bleached one is pale and the healthy one is dark brownish. (That's because of the algae inside). After observing these creatures, I spent some time and asked a couple of questions with the undergrad about why and how does the bleaching happen. Though there is no definitive answer as it is still relatively a new topic, the science field is now gradually reaching a consensus that it is mainly because of the increasing heat in the river and the ocean. Due to the heat, the corals are forced to push out the algae inside and break their symbiotic relationship as they are providing as many benefits for them as before. More reasons can be ocean acidification and so on. Though I have heard of the coral bleaching topic on the news, this is the first time I have learned the actual reason and all of this research and experiments that are going on in the labs. I am glad that I could meet these amazing scientists, and get one step further into this science field.

Earlier in the panel discussion, Dr.Michelle J. Johnson mentioned about her lab, where they combine engineering and neuroscience to develop rehabilitation robots that can expedite a recovery of the brain after brain injuries. The Rehab Robotics Lab is directed by Dr. Michelle Johnson, and I was able to meet four Ph.D. students developing several kinds of rehabilitation robots. Baxter, one of the rehabilitation robots is a humanoid robot that helps stroke survivors. It demonstrates variety of movement that the patients can follow which helps them with the recovery of brain injuries. The second robot was a mobile service robot that is being developed to provide a communication between the clinician and the patient in remote areas. This robot also could coach patients some therapeutic exercises and games. The lab focuses on lessening the cost of physical therapy while maximizing the delivery of the service.

Surrounded by passionate girls, mentors, and pioneers in STEM fields, I feel extremely lucky and grateful for attending this conference and getting to know these amazing people. Upon the tours and panel session, I constantly reflect on the power of STEM subjects and women’s roles in STEM fields. Hearing from the female leaders in STEM, I am inspired by their courage and persistence. Their stories of failures and successes enlightened my passion for STEM subjects and made me ponder upon what I can do in STEM to serve others and to make my community a better place.