Secret in the Wings 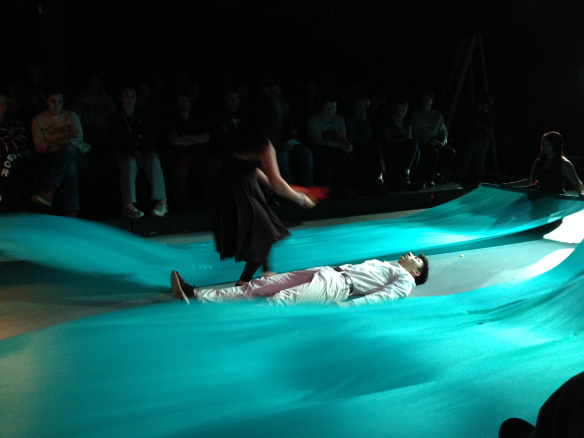 The Secret in the Wings by Mary Zimmerman is a play about telling stories and how those stories inform us in our lives. The play was presented in the Will Parker ’04 Black Box Theatre in November. An encore presentation on March 5 at 8:00 pm, also in the black box, is planned before the actors take the show on the road to England later this week as part of our drama exchange.

The play is an adaptation of five, lesser-known Grimm fairy tales that are told inside of a larger tale. The framing story is based on the well-known story “Beauty and the Beast.” However, in this case, a young girl is left in the care of a rather different babysitter…

Originally, fairy tales were folk tales, often allegorical in nature, and passed down from generation to generation to warn younger people of the dangers in the world. The inner tales in this play are often dark, even tragic, but at the same time often comic and witty. The Secret in the Wings is definitely not Disney.

Live music and dance are an integral part of this production with the choreography created by Samantha Chan, a senior. All of the actors, except for Heidi (Lucy Saltonstall) and Mr. Fitzpatrick (Logan Russell) play multiple roles.

The Tabor/ Ellesmere College Drama Exchange began in 1994 when we hosted an ESU student from Ellesmere College, Chris Hawkins. Through Chris, Mark Howland made contact with Sandy McKinnon, then the head of Drama at Ellesmere, and floated the idea of a drama exchange. Tabor would host a company of Ellesmere College actors; the next year Ellesmere would play host to a Tabor group. Each school would bring a production that would be presented at the other school. The exchange has proved to be a big hit with both schools. Since the first exchange in 1995-96, there have been eight cycles of plays. In 2002 we started doing back-to-back cycles every two years. Tabor would travel to Ellesmere on our spring break while they would come to us during their Easter holidays, usually the first week of April. This year will mark the twentieth anniversary of the first exchange.

The most recent trip in 2013 started off in Dublin, Ireland, where we played at the Sanford Park School, a school I attended half a century ago in the early 1960’s. After a few days in Ireland, we crossed the Irish Sea to Wales and on to Shropshire, England, and Ellesmere College. We ended the trip with a day and a half in London. A similar itinerary is planned for the upcoming trip.

Over the years, both schools have presented some wonderful theatre and made good friends. Many of the students who have gone on this trip call it their favorite Tabor memory. We look forward to traveling this month with The Secret in the Wings and continuing a great Tabor tradition.