Sailing Seawolves in California for Nationals

Friday at dawn, members of the Tabor Sailing Team departed to San Diego to take part in the Interscholastic Sailing Association (ISSA) Fleet Racing Nationals for the Clifford Mallory Trophy. The Mallory trophy is high school sailing’s oldest trophy dating back to 1930 when Headmaster Lillard and others started the sport. Of the twelve founding schools, only Tabor, St George’s and Hotchkiss still remain out of the ~450 high school programs that exist nation-wide today. 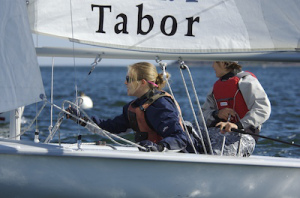 Tabor qualified for this event by finishing in the top four at the New England Championship (the O’Day Trophy) two weeks ago. The other schools come from all over the country; four each from the Pacific Coast, South Atlantic, Mid-Atlantic, and New England. Two from the Mid-West, and one each from the Southeast and the Northwest districts.

Tabor has won the Mallory trophy six times, the last time in 1986. Fleet racing is not what the teams in New England focus on as much as the rest of the country. In sailing, there are three major disciplines. Match Racing, which is what the America’s Cup is all about, featuring one boat against another, winner take all. Team Racing, which is the focus of the majority of our season, involving three Tabor boats against three boats from another school. We race around a course and are awarded points based upon our finishing positions. To simplify the explanation, the team with the lowest total point wins the race, and a meet is usually won based on the best of three to five races. Finally, Fleet Racing involves one Tabor boat on a course with one boat from each of the other competing schools. Again, points are awarded equal to your finishing position. At the end of the regatta, you add up all the points and the lowest total wins. In high school and college fleet racing, each school has two boats, placed in either A-Division or B-Division. All the A boats race against each other and all the B boats race against themselves, too. The points are totaled for both divisions to determine the regatta winner.

Win, lose or draw, I am excited to take this journey with the squad representing your school!