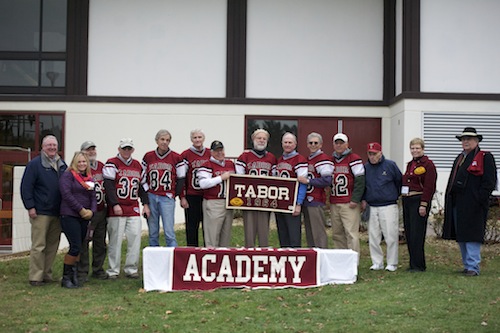 On November 9, the undefeated football team of 1963 reunited on the legendary Tabor field. They came from far and wide to remember the glory days of that fall season as young men, invincible. And, they came to honor one of their own, Bill Illingworth ‘65, a war hero in Vietnam who earned a Purple Heart and served fifteen years with the Army Medical Corps as a Lt. Col., and as a doctor for his community ever since. The team had collected memories and stories, and gathered to unveil and celebrate a more permanent memorial, a commemorative bench overlooking their field, and a scholarship for future Tabor students in Bill’s name. Little did the men know that they would become a part of a larger story, also one of permanence, unfolding around them.

Illingworth knew that successful teams are made through cultivating a winning, hard-working mindset. They are made of individuals who stretch beyond themselves for the benefit of others, without the need for individual recognition, at each critical juncture, just doing what needs to be done. Bill was this sort of teammate on the gridiron, and also in his platoon. The men gathered to remember Bill also had those characteristics, and they had the very special opportunity to recognize their counterparts commanding today’s fields.

After participating in the coin toss for the season ending football game, and enjoying watching the boys play, they met our 2013 Girls Varsity Soccer team at half-time. The girls had just completed their last game in an undefeated season during our rivalry games against Holdernesss School, and we thought it would be fun to put the two undefeated teams together. It was a special opportunity for the generations to come together around a shared experience. Rich Savignano ’64 said, “the enthusiasm shown by the girls soccer team- all strangers- to our accomplishment was heartwarming.”

These early accomplishments are formative and impactful enough that they are not easily forgotten. Coach Steve Sughrue said to the group, “I think it is really special to think about our girls coming back in 50 years, as you have, to celebrate this day together.” At the time, the group did not know that these girls had more to accomplish. They were named the #1 Seed in the Class B New England Tournament later that night.

A few days later, another chapter began for our girls. They had all of Tabor behind them, and now these 60’s era alumni, too! After a win against Lawrence Academy in the quarterfinals, and then a shut-out game against Groton in the semi-finals, our girls faced Rivers School (the #2 Seed) in the finals. The teams battled back and forth over four ten-minute overtimes with no score. The officials declared a tie and crowned the two teams Co-Champions of New England Girls Soccer! 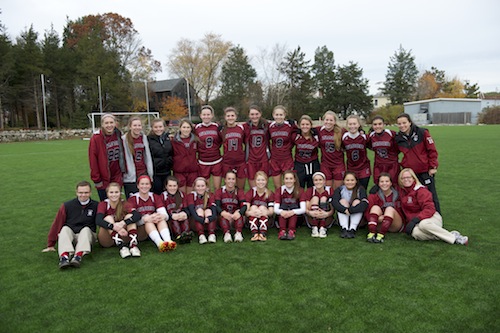 The girls were elated, of course, but perhaps some of their most proud fans were those members of the 1963 Football Team who had the opportunity to meet our girls on the eve of their greatest accomplishment. The two teams had taken the time to speak together about their feelings for Tabor, for their coaches, and for their individual teammates. They spoke about what their teams meant to them, creating new bonds through the shared experience of knowing what it takes to be a winning team. These generational bonds placed in stark relief the permanence of Tabor’s ideals and values across the decades, and the importance of our connection together.

Tim Trautman, Advancement officer and the organizer of the event, said, “For the ’63 football team, meeting the girls turned out to be the highlight of their day back at Tabor. For some alumni, they only know the Tabor they attended those many years ago. What the girls did was, quite literally, to re-introduce them to Tabor Academy. And with that, they shared a few precious moments with talented athletes, eager hosts and a group of adolescents who were interested in their successes of 50 years ago. All really powerful and wonderful messages that gave the members of the ’63 undefeated football team great pride in the Tabor of yesterday…. and today!”

Congratulations to our Champions: to the Tabor Girls Varsity Soccer Team, to the Rivers Girls Varsity Soccer Team, and to our 1963 Undefeated Varsity Football Team. Thank you for turning our fall season into something formative and permanent. Something to be remembered for 50 years and more, but perhaps celebrated sooner: At the 2019 Reunion Weekend our girls will celebrate their 5th Reunion while their new friends will share their 55th! 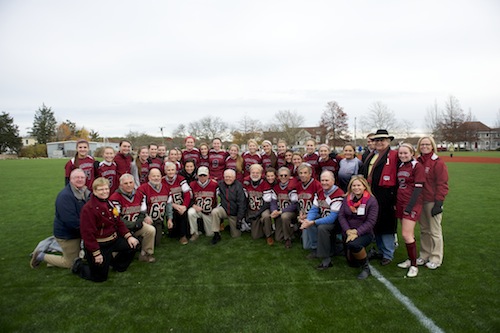